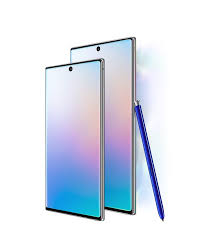 Samsung’s new Galaxy Note 10 Plus is a beautiful device. This is my favourite Samsung designed smartphone and the screen is among the best I’ve seen.

The South Korean company launched two new devices, the a 6.3-inch Note10 and 6.8-inch Note10 Plus. While the Note 10 Plus has all the bells and whistles, why did they launch the Note 10? The only reason I can think of is possibly selling more phones.

The Note 10 is a huge phone but not that heavy. Samsung has done built quality very well for years now. The device is fully IP68 water resistant. The display comes all the way to the edges and corners. But it has no headphone jack, although there are a pair of great headphones in the box.

The Note 10 Plus boasts an array of new features, but I doubt any user will use all them.

Samsung changed the power button placement to the left side of the device, so there is nothing on the right. The fingerprint reader has also moved to underneath the glass like the S10.

For me, the camera array is among the most important features of the Note 10 Plus. It features 3 cameras at the back of the device, similar to the Galaxy S10. It still has the dual aperture main camera and there’s also a 2X telephoto and ultrawide camera.

There’s also a dedicated night mote which you can turn on in a dark environment to take much better pictures.

The Note 10 also has a stylus called the S Pen which for many people actually makes the Note so special. The S Pen does so much more than take notes or being used as a remote for the camera. It has the ability to do gestures in the air just like waving a magic wand.

To be honest. I’ve never used a stylus for anything including notes, but that doesn’t mean it’s not useful for users who like to annotate and drawing on screen and handwriting recognition which is quite cool.

Despite the lack of a high refresh rate, the performance is pretty awesome thanks to Snapdragon 855 processor, UFS 3.0 storage and 12GB of RAM and you can’t really go wrong with that.

The Galaxy Note 10 Plus has a lot of features the Note 10 does not have including the support for 45W wireless charging, the depth sensors on the back for AR, micro SD card slot, the bigger RAM and storage options, the much bigger battery and 1440p display among others.

Overall, the Note 10 Plus is a great phone and hits the five pillars of an awesome device: Great battery, great display, great build, great performance and great cameras.

The Samsung Galaxy Note 10 Plus ships in three colours – Aura Glow, Aura Black, and Aura Pink and sells for R 23,000.